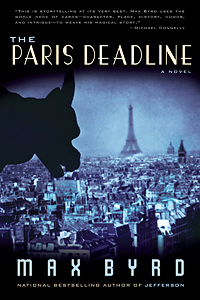 Named one of the top 10 crime novels of 2012 by J. Kingston Pierce of Kirkus Reviews!

Newspaper reporter Toby Keats, a veteran of the Great War and the only American in Paris who doesn't know Hemingway, has lived a quiet life—until one day he comes into possession of a rare eighteenth-century automate, a very strange and somewhat scandalous mechanical duck. Highly sought after by an enigmatic American banker, European criminals, and the charming young American Elsie Short, the duck is rumored to hold the key to opening a new frontier in weapons technology for the German army, now beginning to threaten Europe once more. Haunted with his nightmarish past in the War, Toby pursues the truth behind the duck.

From the boites of the Left Bank to the dark prehistoric caverns of southern France, The Paris Deadline is a story of love, suspense, and mystery in a world stumbling toward catastrophe. 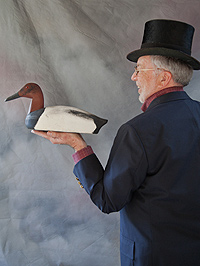 "Wow! This is storytelling at its very best. Max Byrd uses the whole deck of cards—character, place, history, humor, intrigue—to weave his magical story. You want a good ride? The Paris Deadline is your ticket!"
—Michael Connelly

"Max Byrd's The Paris Deadline is the best 'code and cipher' novel I've ever read, a wonderful historical thriller!"
—John Lescroart, author of THE THIRTEENTH JUROR and BETRAYAL

"Some of the things I love most about the book—the wit and erudition, the scholarship, the interesting things about the underground war and automates—are not the things other people will like best. They'll be caught up in the mystery of the duck and the love story between the appealing Toby and Elsie, and the fact that it's set in Paris. Of course, I love that too!"
—Diane Johnson, author of LE DIVORCE and THE SHADOW KNOWS

"[Byrd] delivers a sparkling and suspenseful caper with a mystery plot well-rooted in a loving re-creation of Jazz Age Paris."
—J. Kingston Pierce, The Rap Sheet (read the full review)

"Byrd is a best-selling historical novelist, and he excels at presenting little-known historical tidbits that serve to enhance the narrative. He really brings Paris of the 1920s to life, and his portrayal of the times is flawless."
—ReviewingTheEvidence.com 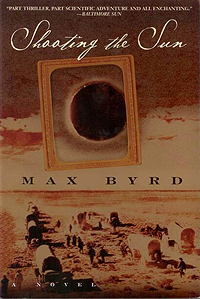 
No Presidents (well, Martin Van Buren has a scene), but a brave heroine. Young Selena Cott, sponsored by the eccentric English inventor of the computer, Charles Babbage, sets out in a wagon train on the Santa Fe Trail in 1840. Her goal: to photograph an eclipse of the sun. Obstacles include the great empty and unmapped spaces of the West, a roving band of Kiowa Indians, and Babbage's own uncle.

"Full of insights and laced with subtle humor... The novel is a winner."
—Denver Post